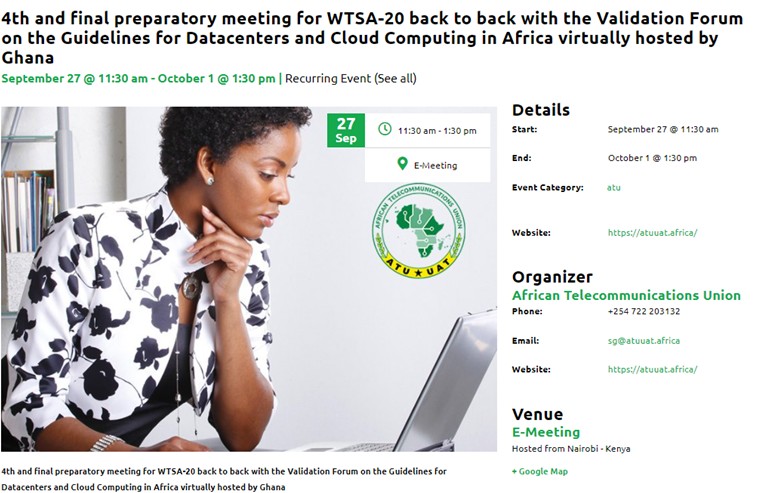 The African Telecommunication Union (ATU / ATU), in collaboration with the National Communications Agency of Ghana, held an interregional session, which considered the preparation for WTSA-20. The meeting was held in a virtual format using the Zoom platform. The meeting was moderated by the representative of the ASE Secretariat, Ms. Alice Koech.

The meeting was opened with welcoming remarks by the host administration on behalf of the Director General of the National Communications Agency of Ghana, Mr. Kwame Baah-Acheamfuor. The Deputy Minister of Communications and Digitalization of Ghana Ms. Ama Pomaa Boateng also made a welcoming speech to the audience.

In addition, the importance of standardization, digitalization and further development of the communications and ICT industry for the African region was highlighted in the presentation by the Head of the ITU Telecommunication Standardization Bureau (TSB) Study Groups Department, Mr. Bilel Jamoussi. The introductory part was closed by the speech of the Secretary General of the ATU, Mr. John Omo.

Within the framework of the information on the preparation for the upcoming Assembly, both at the ITU level as a whole and in the regions, 4 speeches were presented.

On behalf of ITU, Mr Bilel Jamusii made a presentation providing an overview of the outcomes of ITU-T and TSB's work in view of the pandemic and relevant information on ITU's preparations for WTSA-20. In particular, he confirmed the information about the impossibility of holding events in Hyderabad (India) and about the transfer of WTSA-20 and GSS-20 to Geneva (Switzerland). In addition, Mr. Bilel Jamoussi drew attention to the deadline for the submission of contributions and proposals by Member States to WTSA-20.

On behalf of the ASE, the WTSA-20 Preparatory Coordinator Ms Meriem Slimani made a presentation on the current state of the African Region's preparations for WTSA-20 and plans to review and finalize African Commonwealth Proposals (AFCPs) for WTSA-20, and expectations from decisions WTSA, as well as - the list of candidates from the ASU for elective posts in the ITU Telecommunication Standardization Sector.

On behalf of the ASE, the coordinator for the preparation for WTSA-20, Mr. Yevgeny Tonkikh, made a presentation with information on the progress in preparing the RCC CAs for the upcoming Assembly. It was noted that the RCC countries are planning an additional meeting of the Working Group on work with ITU for detailed consideration and preparation of the final drafts of the RCC OP for WTSA-20. A list of existing projects of the RCC OP was presented with an emphasis on the content of the proposal for a number of them that could be of interest to the ATU countries.

Within the framework of this presentation, candidates from the RCC country were nominated for elective posts in the ITU-T SG and TSAG. It was emphasized that the CA of Russia is nominating the chairman of ITU-T SG11 prof. Andrey Kucheryavy. The nomination of the ITU-T SGs vice-chairmen, who are eligible for a second term, was also confirmed: ITU-T SG 3, SG 17 and SG 20. It was announced the nomination of candidates from the CA of Russia and the CA of Uzbekistan in IK2, IK5, IK13 and in the TSAG. The RCC Coordinator informed that the RCC countries, on the eve of WTSA, have proposals on the appointment of their representatives to the working bodies of the Assembly.

At the end of this session, prof. Yoichi Maeda, as Chair of the Asia-Pacific Telecommunication Community (APT / APT) Preparatory Group for WTSA-20, gave a brief presentation on the preparation of APT for the Assembly, in which the APT OP drafts for revising or creating new WTSA Resolutions were presented, indicating coordinators accompanying these EPs.

Secretary General John Omo thanked all representatives of regional organizations and ITU-T representatives for the participation and wished delegates a successful preparation for WTSA-20. 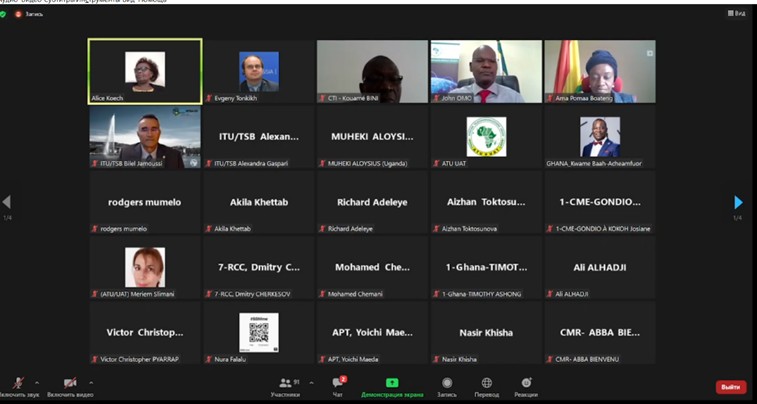 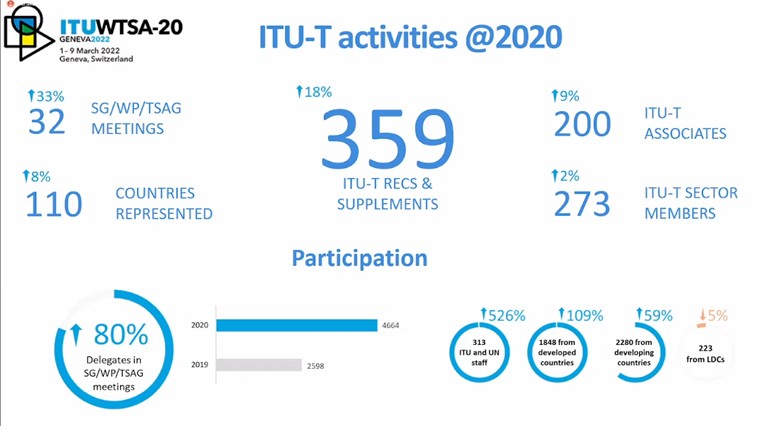 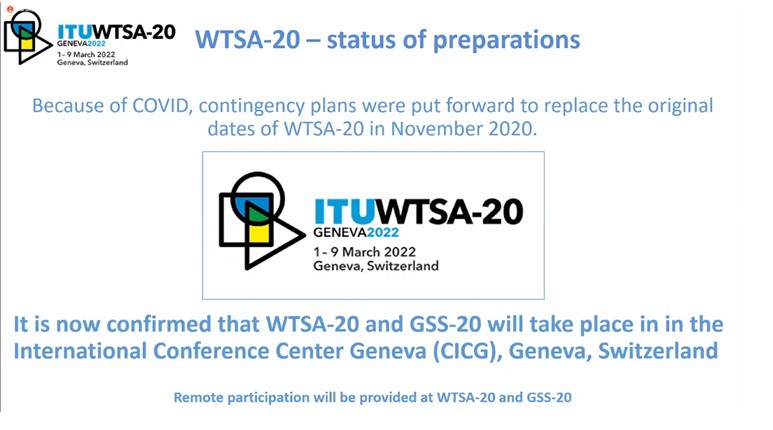 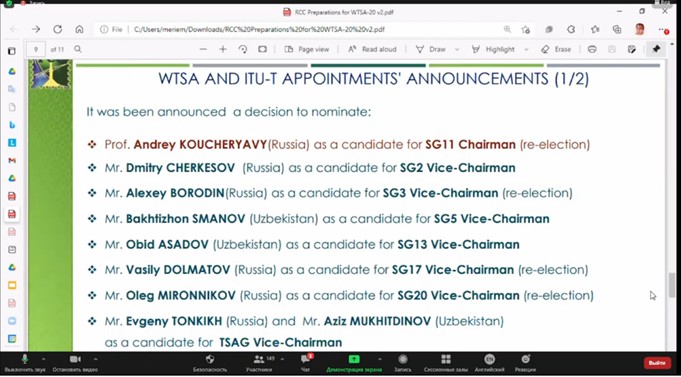 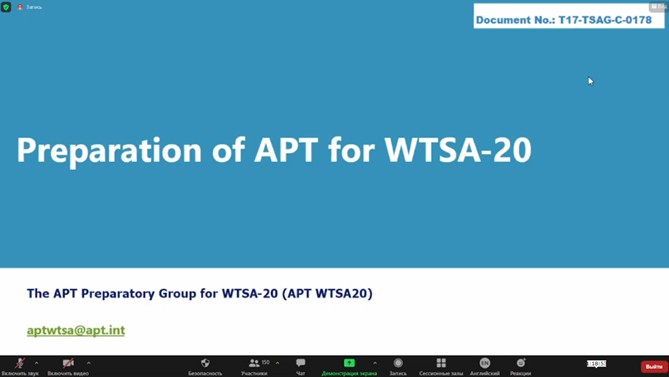 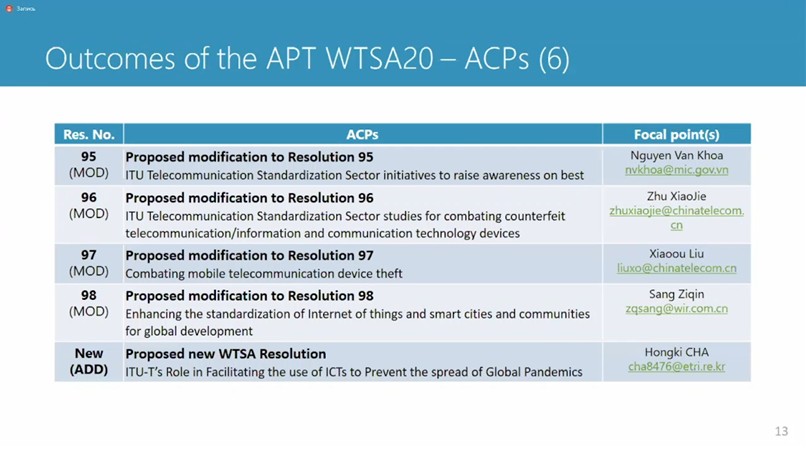