On May 18, 2021, a meeting of the Expert Group on the formation of the RCC's position on proposals for the 27th UPU Congress in the format of a videoconference was held. 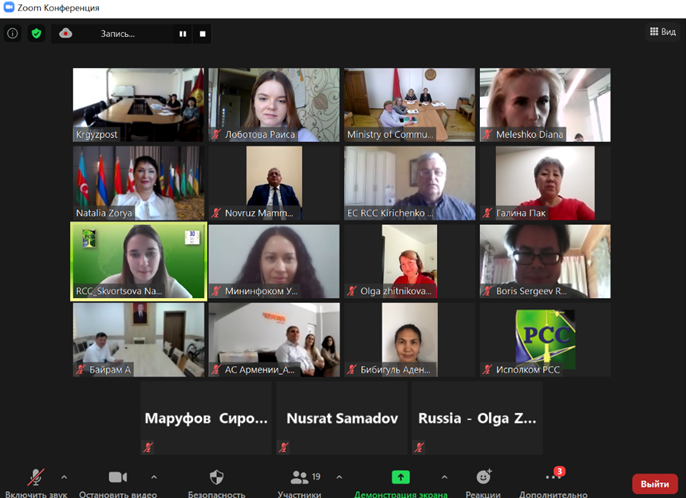 The meeting was moderated by Natalia Evgenievna Zorya, Deputy Director General of the RCC Executive Committee.

The Chairman of the RCC Postal Commission, Head of the postal sector of the Ministry of Communications and High Technologies of the Republic of Azerbaijan, Mamedov Novruz Gulu oglu, addressed the meeting participants with a welcoming speech.

The meeting was chaired by the Deputy Chairman of the Working Group for work with the UPU under the RCC Postal Commission and the RCC Postal Operators Council, Head of the International Relations Department of Russian Post JSC Olga Igorevna Zhitnikova.

- On the proposals of the CA of the Republic of Uzbekistan to the 27th UPU Congress;

- On the development of an agreed position of the RCC in relation to draft documents for the UPU Congress, presented in the consolidated analysis of proposals submitted by the Administrative Council, the Postal Operations Council and the UPU member countries to the Charter, Convention, Convention Regulations, Internal Regulations of the Congress and the Agreement on postal payment services for consideration at the 27th UPU Congress, prepared by the Communications Administration of the Republic of Belarus.

The purpose of the meeting was to discuss a wide range of issues to develop an agreed position of the RCC in relation to proposals for the 27th UPU Congress.

Following the meeting, it was decided to organize an additional meeting on May 28, 2021, taking into account the consideration and adoption of final decisions.

Concluding the meeting, the Chairman of the RCC Postal Commission and the Deputy Chairman of the Working Group on work with the UPU expressed gratitude to the CAs of the Republic of Belarus and the Republic of Uzbekistan for their significant contribution to the work, and also thanked the participants of the meeting and the RCC Executive Committee for the high-quality and prompt organization of the meeting in the format of videoconference.