40th meeting of the RCC Board of the CAs Heads 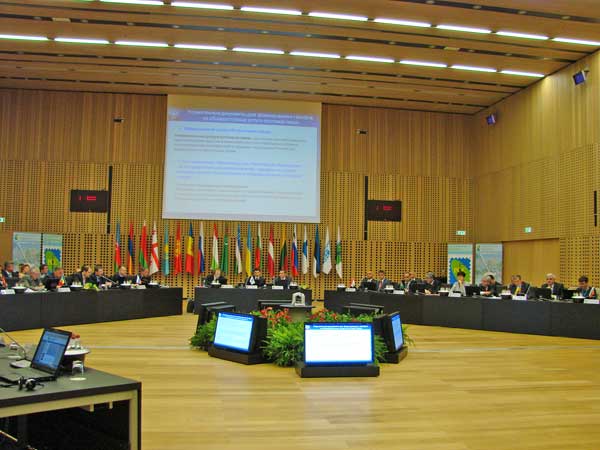 The meeting was chaired by the Chairman of the RCC Board,

Minister of Telecom and Mass Communications of the Russian Federation I.O. Schegolev.

The Minister of Economy of the Republic of Slovenia, Matej Lahovniki, Director of the Telecommunication Standardization Development Bureau of the International Telecommunication Union Malcolm Johnson, addressed the meeting with a welcoming speech. 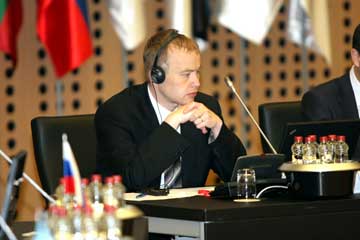 The meeting began with the admission of new members to the regional community in the field of communications: the Communications Administration of the Republic of Lithuania - as an observer of the RCC and OJSC Mobile TeleSystems (Russia) - as associate members of the RCC Telecommunications Operators Board.

On the issue of the activities of postal operators of RCC participants in the context of the transformation of the postal sector, information was heard from the communication administrations of Uzbekistan and Slovenia. The RCC Board noted that in the context of growing demands of markets and customers, RCC communications administrations are developing and implementing long-term programs for the modernization and development of postal services, addressing financial and material resources, improving the regulatory framework and management functions, taking into account the specific conditions of the economies of countries and international trends. Recommended to the RCC Working Groups on Postal Communication in the development of the draft Regional Development Plan for the Postal Sector of the RCC CAs for 2009-2012. take into account the experience of postal operators in order to introduce new services using advanced information and communication technologies and improve the quality of services provided.

Much attention was paid to discussing the preparation of the "Connect the CIS Space" high-level meeting. The RCC Board noted that this event will contribute to a new round of relations between representatives of government, business, financial institutions, scientific organizations and equipment suppliers interested in developing the information communications industry, on the way to building a global information society in the CIS region. In order to prepare for this meeting, the RCC Board considers it appropriate to establish a high-level RCC Expert Working Group chaired by the CA of Belarus.

A number of issues were discussed regarding the preparation of RCC communications administrations for future forums of the International Telecommunication Union. The RCC Board of CAs Heads approved the RCC CAs Preparation Plans for the 2010 World Telecommunication Development Conference and the ITU Plenipotentiary Conference and instructed the relevant RCC working bodies to prepare RCC General proposals on the agenda of the Conferences. The course of joint work on the preparations for the World Radiocommunication Conference and the Radiocommunication Assembly 2011, held within the framework of the relevant RCC Commissions, was approved and the intermediate results on the preparation of the preliminary position of the RCC CAs on WRC-11 agenda items were noted. Noting the feasibility of using coordinated approaches to addressing the implementation of digital broadcasting, the RCC Council approved the “Recommendation on the coordination of new and modification of planned frequency assignments/allotments of terrestrial digital television and sound broadcasting in the frequency band 470-862 MHz between RCC CAs”. The document was developed in the interests of the RCC CAs with the aim of facilitating the mutual coordination of the frequency assignments of digital TV broadcasting when implementing the national digital allotments of the Geneva-06 Plan (GE06) and when modifying this plan. The document can be used by communications administrations in the development of bilateral and multilateral coordination agreements.

Taking into account the great social importance of the development of mobile networks, the Council decided to continue the joint coordination of work in developing further decisions on the development of IMT-MC networks in the countries of RCC participants.

After hearing information about the project to create a transnational Eurasian information superhighway (TEIS), it was decided to send Rostelecom to the TEIS working group as an RCC expert.

The communication administrations of the Republic of Moldova and the Russian Federation shared their experience in providing universal communication services. The meeting participants noted that the provision of such services is of socio-economic importance in the light of the integration and development of the processes of building the information society.

The meeting participants discussed issues related to the activities of the Commonwealth. The “Regulation on the organization of events within the framework of the charter activities of the Regional Commonwealth in the field of communications” was approved. Within the framework of the issue of revising the RCC statutory documents, it was decided to consider at the meetings of the RCC working bodies improvement of the RCC structure. The report on the work of the RCC Executive Committee for 2008 was approved. The RCC Board elected Zorya Natalya Evgenievna as Deputy General-Director of the RCC Executive Committee.

The next 41st meeting of the RCC Board was decided to be held in November 2009.

In conclusion, the meeting participants expressed gratitude to the Government and the Communications Administration of the Republic of Slovenia for the warm welcome and organization of the meeting of the RCC Board.