39th meeting of the RCC Board of the CAs Heads


On September 24, 2008, the 39th meeting of the Regional Commonwealth in the Field of Communications Board of the Communications Administrations Heads (RCC Board) was held in Ashgabat (Turkmenistan).

The meeting was chaired by the Chairman of the RCC Board, Minister of Telecom and Mass Communications of the Russian Federation I.O. Schegolev.

President of Turkmenistan Gurbanguly Berdimuhammedov received a welcoming message from the Minister of Communications of the Republic of Turkmenistan, R. Khojakurbanov, which was addressed to the participants of the meetings. A word of greeting was presented to the Director of the Radiocommunication Bureau of the International Telecommunication Union (ITU) VV Timofeev, Director of the ITU Telecommunication Development Bureau (TDB) Sami Al-Bashir Al-Morshid. During the speech, the Director of ITU TDB presented information on the ITU "Connect the World" initiative and the possibility of holding such an event for the RCC participants.

A greeting was also heard from the General-Director of the International Bureau of the Universal Postal Union (UPU) E. Dayan.

Participants in the meeting of the RCC Board discussed the preliminary results of the 24th Congress of the Universal Postal Union, which completed its work in August of this year, in Geneva (Switzerland). It is noted that the RCC Postal Commission and the RCC Postal Operators Board have done significant preparatory work, including the preparation of the RCC General Proposals.

Most of the proposals made on behalf of the RCC were reflected in the UPU documents adopted by Congress: the General Regulations, the Universal Postal Convention, the Rules for Written Correspondence and Postal Parcels.

The joint work of the RCC CAs allowed to strengthen the role and authority of the Regional Commonwealth in the field of communications. The countries of the RCC participants were elected to the UPU permanent bodies: the Azerbaijan Republic, the Republic of Kazakhstan, the Russian Federation and Ukraine - to the Administrative Council; The Republic of Azerbaijan and the Russian Federation - to the Postal Operators Board.

It was decided to continue practical work on the implementation of the decisions of the 24th Congress by the RCC working bodies, paying particular attention to improving the quality of postal services. Having heard the question “On the interaction of postal operators of the countries of the RCC in the field of postal security”, the Board considers it appropriate to entrust the RCC Postal Commission, the RCC Postal Operators Board and the RCC SPSB to support RCC participants in the development and implementation of joint projects to prevent and identify the causes of illegal actions in s postal service, its use for terrorist purposes, to suppress attempts of money laundering other manifestations of illegal acts.

The preparations for the RCC CAs for the upcoming World Telecommunication Standardization Assembly of the International Telecommunication Union (WTSA-08, October 21-30, 2008, Johannesburg, South Africa), affecting the interests of a wide range of consumers and suppliers of communication equipment and services, were discussed. The RCC Board emphasized the importance of coordinating the positions of the RCC communications administrations in shaping the technical policy for the development of national communication networks when entering the global infocommunication infrastructure, developing on the basis of the latest technologies.

RCC Communications Administrations decided to hold regular consultations and coordinate positions during the Assembly, to support each other in protecting mutual interests, including the promotion of candidates for the leadership of study groups and the Advisory Group of the Telecommunication Standardization Sector of the International Telecommunication Union (ITU). 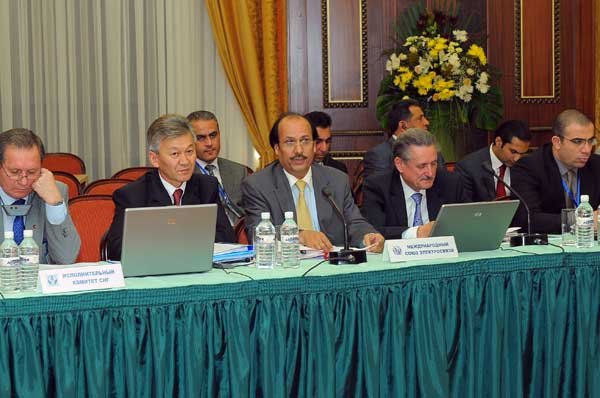 The Board endorsed the implementation of the outcomes of the World Summit on the Information Society (WSIS, Geneva 2003, Tunisia 2005). It was decided to regularly provide ITU with information on projects and initiatives in the countries of RCC participants to implement the decisions of the summit, and to participate in the preparation of proposals for a roadmap for the implementation of ITU's WSIS decisions by 2015. The promotion of the internationalization of top-level domain names on the Internet in ICANN was supported and to work on the creation of an advisory group at the RCC to coordinate work on the introduction of Cyrillic on the Internet.

Having reviewed the outcome of the 2007 ITU World Radiocommunication Conference (WRC-07), the Council noted that WRC-07 had made important decisions regarding the development and implementation of future generations of mobile communications systems, air telemetry and telemetry systems for satellite services, digital broadcasting, and the use of radio communications for detection natural disasters and security. The work of the RCC Commission on the Regulations of the Usage of the Radio Frequency Spectrum and the Electromagnetic Compatibility of Radio-Electronic Means and the RCC Commission on Satellite Communications, Television and Sound Broadcasting, which began the systematic preparations for the Radiocommunication Assembly and the 2011 World Radiocommunication Conference, was approved.

Having heard the question about the implementation of the decisions of the 2006 Regional Radiocommunication Conference (RRC-06) and about the experience of introducing digital broadcasting in the countries of RCC participants, the Board considers it necessary to further carry out a set of organizational and technical measures to develop programs for introducing digital television broadcasting, frequency assignment plans, determining criteria and parameters of technical means of digital broadcasting, etc.

The meeting participants reviewed the preliminary results of the revision of the RCC statutory documents. Having taken note of the draft Agreement developed by the International Association “International Law Association” and approved by the RCC Statutory Documents Review Working Group on the establishment of the “Regional Commonwealth in the field of Communications” international organization, the Council requested RCC CAs to conduct domestic consultations necessary to prepare the signing of this agreement. The implementation of work on this issue is planned to be considered at the 40th meeting of the RCC Board of the CAs Heads.

The meeting participants discussed issues related to the activities of the Commonwealth.

The new edition of the “Regulation on the organization of research and development in the Regional Commonwealth in the field of communications” was approved.

The Board of the CAs Heads approved the list of events to be held in 2009 within the framework of the statutory Commonwealth and elected the heads of the RCC working bodies (Operators Board and RCC Commissions) for the next three-year term, as well as the composition of the RCC Revisory Commission.

The Council appointed the Head of the Communications Administration of the Republic of Moldova Pavel Bucecki as Deputy Chairman of the RCC Board of the CAs Heads.

The next 40th meeting of the RCC Board was decided to be held in Slovenia in the 2nd quarter of 2009. The provisional agenda for the meeting has been formed.